Questions? Feedback? powered by Olark live chat software
We are closed from 4.30pm on Wednesday 1st June, and will reopen at 8.30am on Monday 6th June.
For emergencies during this time please call 0303 040 1998 and you will be transferred to our out of hours service.

Meet Mrs Dorothy Watts, a passionate gardener who has the ability to make everyone smile and who also happens to be Newydd’s longest standing tenant. Mrs Watts celebrated turning the grand age of a hundred today. She has been a tenant with Newydd for a whopping 41 years, since 1979.

We went over to Newydd Court to celebrate and have a chat with Mrs Watts who shared her fascinating life stories with us.

Born in 1920, just after the first world war, Mrs Watts has lived a full life. She has always been a Cardiffian and has always been a keen learner. Her passion for learning was so strong that she even attended evening classes at Gladstone School on Whitchurch Road at the age of 13.

Mrs Watts and her late husband were married on Boxing Day 1940 and they went on to have two lovely children together, Brian and Carol. She also has 3 grandchildren and 8 great-grandchildren. 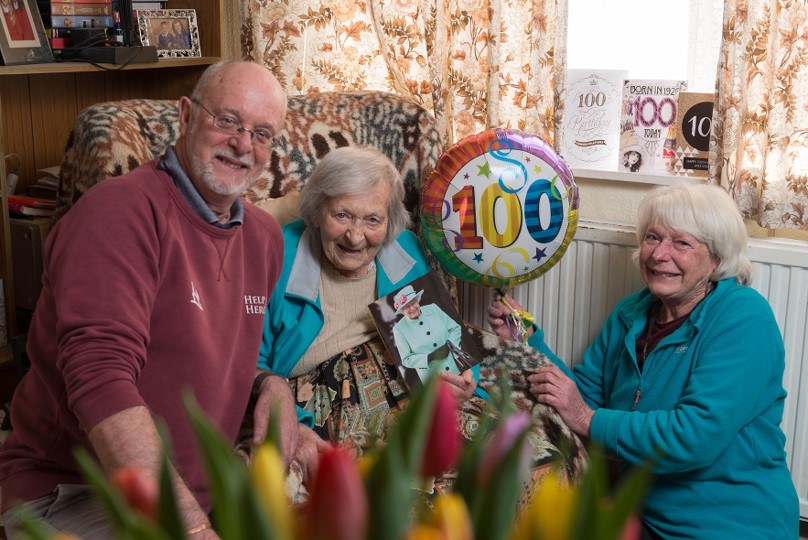 Mrs Watts with her children; Brian and Carol

Mrs Watts loves to cross-stitch, as seen from the photos of her lovely tapestries which she takes pleasure in displaying around her home. She also enjoys sewing and knitting and has made many blankets and clothes. Mrs Watts has also been a very keen gardener throughout her life, she even won Newydd’s gardening competition – something she takes great pride in. Mrs Watts passed her driving test at the age of 60. However, even after passing her driving test, she still enjoyed hopping on a random bus to a random location. Mrs Watts enjoyed being spontaneous and used the bus service independently until she was 95. 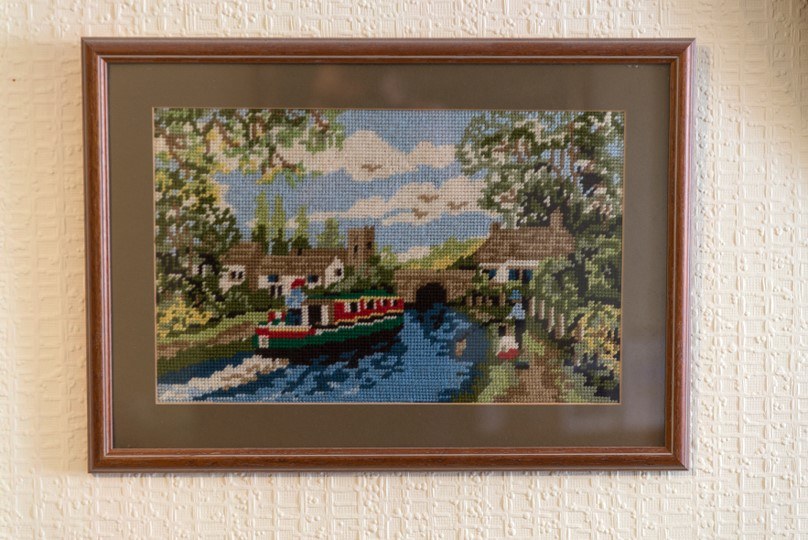 One of Mrs Watts' tapestries

Mrs Watts has had a very interesting working life, having had various job roles. When she left school, she started working in a Drapers Shop in Cardiff. She then went on to work in Haywoods shoe shop in Butetown where she worked for around 5 years. When the war started, she went to work in another shoe shop, Dolcers, where she recalls hearing Doodlebugs (flying bombs) falling from the sky around Cardiff.

During the Second World War it was common for women to undertake job roles that were traditionally undertaken by men since several men had gone to fight in the war, this is when Mrs Watts went to work in wire rope works. She then did some office & cleaning work at Wagon works, where her husband also worked in the factory. Afterwards she worked in a couple of bakeries including The Wonderloaf on Maindy Road and Memory Lane.

Not only is Mrs Watts a Newydd tenant, she also used to be employed by Newydd as a cleaner at Newydd Court after she moved in there. Mrs Watts moved into Newydd Court in the 70s, soon after it was built, after her previous home in Maindy, where she lived with her husband, was demolished due to its poor standard. She recalls moving into Newydd Court as being a “luxury” since her and her husband’s previous home didn’t have indoor toilets or central heating. Her mother also moved into another flat in Newydd Court at the same time so that she could care for her.

Mrs Watts said that she has “enjoyed living at Newydd court”, and “had lovely neighbours”, with a special mention of Molly, her next-door neighbour who became her lifelong friend. Molly has since moved to Bristol to be closer to her family, but Mrs Watts is still in touch with her.

Paul Roberts, Chief Executive at Newydd said, “Newydd Court was one of the first housing developments that Newydd built and Mrs Watts is our longest standing tenant, we are all delighted to be able to share in her 100th birthday celebrations. It’s a remarkable achievement and we are all honoured to be her landlord. Happy birthday Mrs Watts.”

Thank you, Mrs Watts, for being such a lovely tenant. 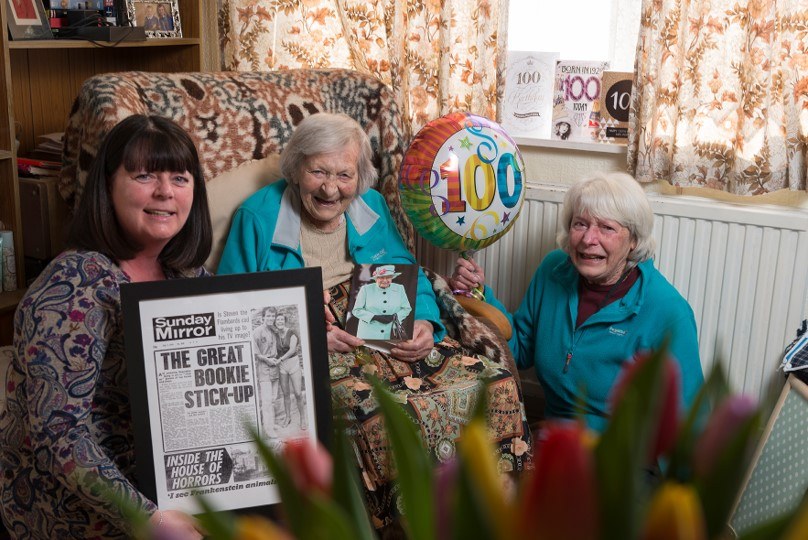 Mrs Watts with her Housing Officer Debbie, her daughter Carol, and the gifts that she received from Newydd (a balloon, some flowers and a framed news paper from the day she moved in to her home) and a special card from the Queen 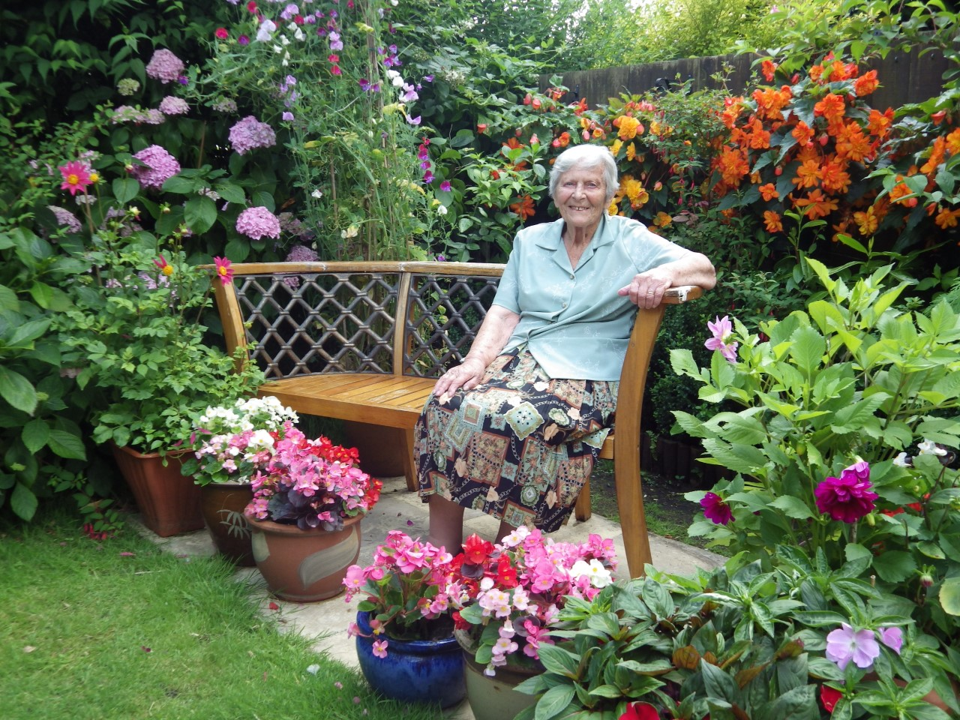 Mrs Watts in her lovely garden a few years ago